Using watermelon to combat erectile dysfunction can be effective according to new studies. Consequently, men’s sexual health could benefit from eating more watermelon.

This fruit doesn’t have the same instant reaction such as typical erectile dysfunction medications, like Viagra, Levitra, and Cialis which rely on phosphodiesterase type 5 inhibitors. However, watermelon is natural and cheap. It may be the answer for men with mild erectile dysfunction.

Not only is watermelon a ‘natural Viagra’ great for supporting sustained erections, it also has other health benefits. Watermelon is rich in vitamin C and supports healthy immune function, and better cardiovascular health. 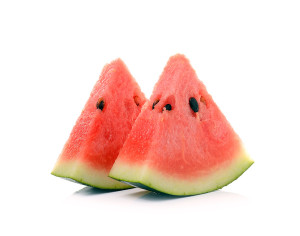 Watermelon is a very popular fruit and widely eaten around the world. Originating from Southern Africa, over 90% of this fruit is made up of water. However, it also contains valuable nutrients.

One of the amino acids found in high qualities in watermelon (L-citrulline) has caught the attention of scientists for the treatment of erectile dysfunction. L-citrulline is a naturally occurring amino acid which is converted by the body into L-arginine.

The amino acid L-arginine is the precursor to nitric oxide (NO). This natural gaseous compound is necessary to support blood vessel dilation. Consequently increased availability of NO can assist men in maintaining erections.

It is possible to take L-arginine supplements to help enhance erectile function naturally. However, some men don’t tolerate higher doses of L-arginine as it may cause headaches and nauseous. Increasing L-citrulline concentrations can be a gentler approach.

Researchers have found that oral supplementation with L-citrulline is a safe and effective way to elevate L-arginine levels and subsequent NO to treat mild erectile dysfunction.

Scientists from the University of Foggia in Italy invested the effects of oral L-citrulline supplementation on 24 men with a mean age of 571. These men all suffered from some degree of mild erectile dysfunction.  For one month they received a placebo and for another month they were given L-citrulline.

To assess the effectiveness of L-citrulline supplementation researchers recorded the frequency of intercourse each month, the participant’s Erection Hardness Score (EHS) (ranging from 0 = no penis enlargement, through to 4 = penis completely hard and fully rigid), treatment satisfaction, and any adverse side effects.

This was compared with only 2 out of 24 men recording a score of 4 while taking the placebo. Sexual activity was also reported to increase following L-citrulline supplementation. Men who recorded EHS of 4 reported as being more satisfied following this treatment.

How much watermelon to combat erectile dysfunction is needed?

Around four servings of watermelon per day can be enough to help improve sexual function. Alternatively, one serving of yellow watermelon (not as readily available) will also deliver the same amount of L-citrulline. Other foods that are rich in L-citrulline include legumes, nuts and meat.

If you are not a fan of watermelon, there are supplements available that contain L-citrulline. Studies show that doses between 2 and 15 grams a day are well tolerated by men2.