I have done a lot of research on Arginine, because it is the main nutrient, which helped me beat my impotence.

It is a semi-essential (sometimes called “conditional”) amino acid. This means that the body actually produces it itself, but not always in sufficient amounts for optimal health benefit1! It’s main health benefits are that it improves circulation throughout the body, lowers blood pressure and reduces healing time of injuries. 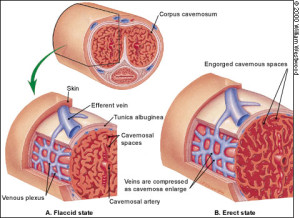 When Arginine is combined with Pine Bark Extract (Pycnogenol), the body’s natural ability to produce Nitric Oxide needed to create an erection is greatly increased.

This means you get a healthier and sustainable erection. Further, quite a few studies have found that you might also get to enjoy subtle holistic health benefits such as better digestion, immunity2, energy levels3, muscular strength4, healthier skin and hair5.

I was amazed to read that the cardiovascular health benefits of Arginine to the human body are so significant that the Nobel Prize committee rewarded the researchers who discovered its effects in the 60s and 70s with the Nobel Prize in Medicine in 1998. The researchers had conclusively discovered that Arginine is the most important precursor to Nitric Oxide (NO), which is the neurotransmitter used in the human body to signal vasodilation or the relaxation or blood vessels walls allowing them to expand and more blood to flow through them.

Arginine therefore has a statistically significant life-prolonging effect, because better circulation means less risk of cardiovascular disease. Indeed, circulatory diseases are the number number 1 killer in the Western world above the age of 45.

Specifically for erectile function, Nitric Oxide ensures that the penis can be naturally and effectively filled with blood, so it can mechanically function the way it is designed to. In fact, not being able to fill the penis with blood is the most common cause of ED. This type of ED is called “vascular Erectile Dysfunction”.

Dr Ignarro, one of the Nobel-Prize winning researchers of the “Benefits of Nitric Oxide as a signalling molecule in the cardiovascular system” talks about the benefits in this very interesting video:

PURE ARGININE ALONE DOES NOT SEEM TO BE ENOUGH
Early studies concluded that a dose of 5,000mg per day of Arginine does not have a satisfactory effect on treating erectile dysfunction as only 31% of subjects reported improvement6.

However, when the Arginine was combined with 80mg of Pine Bark Extract (PBE) per day, even a smaller dose cured erection problems in 92.5% of participants7.

I had a look for more studies to confirm this and found one conducted in Japan. The results weren’t as incredibly high, but the dosis was lower8 so I thought to myself this is good enough to try out.

Pine bark extract is a powerful multi-purpose agent and produced from the French Maritime Bark. It contains so-called Pycnogenols and is therefore also marketed as Pycnogenol. It has been used in alternative medicine for hundreds of years and it’s effect proven in over 30 studies.

Interestingly, while Arginine alone did not have significant benefits to the erection9, 2003 a key study found that an Arginine-pine bark extract combo effectively healed 92.5% of men with diagnosed erectile dysfunction after 3 months!10

These two nutrients reinforce each other and make for an erection-boosting “Dream Team”.

I have not looked back since I have been taking Arginine and Pine Bark Extract. I feel stronger and healthier knowing I am doing something very sensible for my health. I now have a very active lifestyle with lots of outdoor exercise, not just in the bedroom 🙂

Here is a list of the scientific studies, which convinced to take Arginine and Pine Bark Extract: